Import from Palette vs using SPMIMPORT

The ‘Spatial Manager’ main Palette includes many of the most relevant and commonly used functions in the application, such as the importing functions. But in the CAD versions (AutoCAD, BricsCAD or ZWCAD), you also can find direct import commands that can be more comfortable and faster when you don’t have the Palette open, or when you want to program/chain importing processes 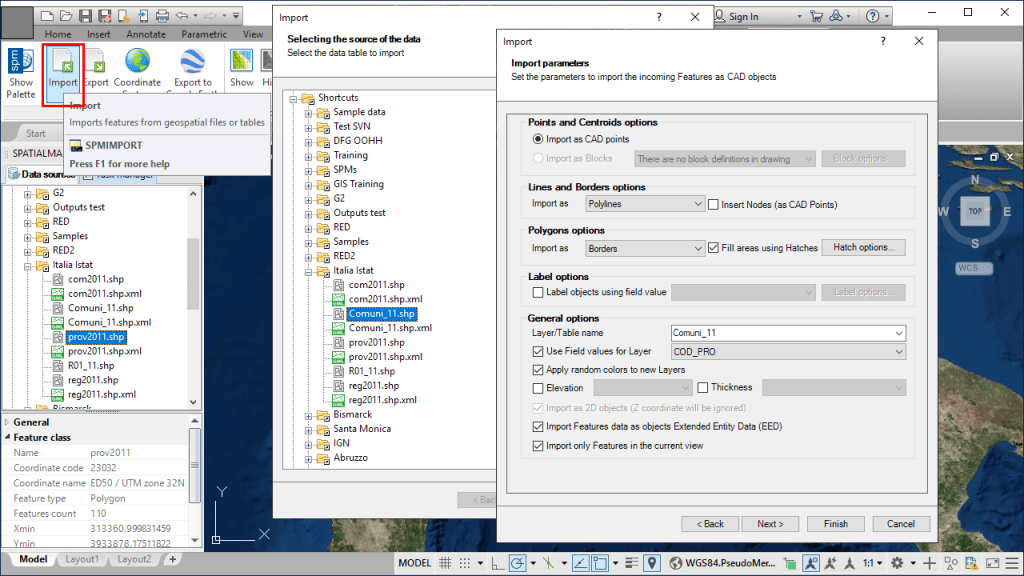 ‘Spatial Manager’ – Import from the application palette or execute SPMIMPORT

Alternatively, as you can see in the videos above, if you want to import spatial data into the current drawing without using the Palette, you can execute the SPMIMPORT command, which will access the same data source structure as in the Palette and will launch the import wizard in the same way

A variant of this command is also available in the Command Line (-SPMIMPORT) where the name of the import Task to be executed is specified as a parameter (About Tasks: AutoCAD / BricsCAD / ZWCAD). Since the command parameter supports wildcards, several Tasks whose names match a particular pattern can be executed at once

By running this command from the Command Line, for example:

-SPMIMPORT Build*, will run consecutively all saved Tasks whose names start with “Build”

It is also convenient to point out here that -SPMIMPORT can be executed from within a CAD Script (*.SCR), which will facilitate the execution of multiple import Tasks, using or not wildcards, when executing the Script. As an example:

Learn more about how to import and customize spatial objects and data into your drawings from the Application Palette, through the SPMIMPORT direct command, or from the Command line and Scripts (-SPMIMPORT):