The tool to capture static images (Snapshots) from dynamic Background Maps in the CAD editions of ‘Spatial Manager’ (AutoCAD, BricsCAD and ZWCAD), now adds the options to select the image area to be captured and to embed in the drawing the captured image as an OLE object 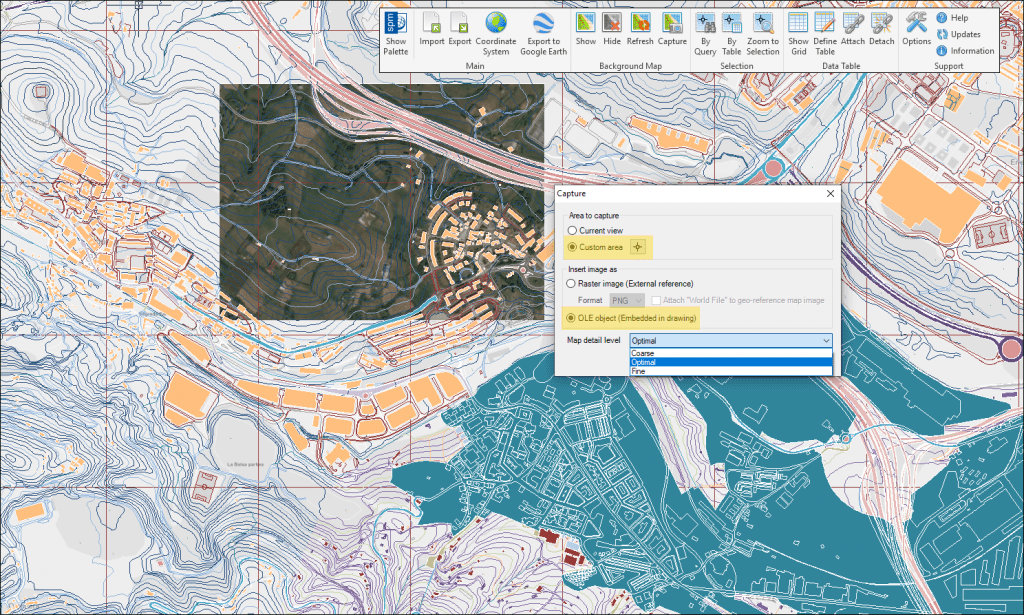 Capturing static images from dynamic Background Maps allows you to combine different types of maps in one drawing, send drawings to third parties including static map images and improve the possibilities of printing maps from different view points or using Layouts. It should also be noted here that the number of captures is unlimited, so the options to enhancing the maps finishing are also virtually unlimited

From ‘Spatial Manager’ v.5.2, you can define a custom area to capture, and not just the full screen, which allows you to fine-tune the area to be “photographed” as well as define multiple captures from a general image of the map

Also in this version has been added the ability to insert the captured image as an OLE (Object Linking and Embedding) within the drawing, and not just as a Raster Image externally referenced

This new option simplifies, among other benefits, the storage or sending of the map in a single file without the need to depend on other auxiliary files. This new capture method allows you (as with raster images) to define up to four levels of map detail for the captured area

Note: CAD versions Background Maps functionality is available in the Standard and Professional editions only